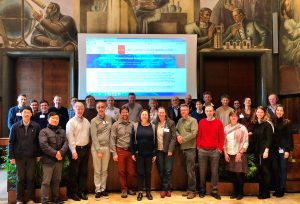 The 23rd annual IOCCG Committee meeting took place in Rome, Italy (6-8 March 2018) and was hosted by the National Research Council of Italy (CNR).  Representatives from many international space agencies as well as scientific committee members from around the world participated in the meeting.  Agency members presented updates on various ocean colour missions, and the status of the six current IOCCG working groups was reviewed – the report from the working group on “Earth Observations in Support of Global Water Quality Monitoring” should be available by the end of this year. Other items discussed included emerging technologies for ocean retrievals beyond passive radiometry (using space-borne Lidar and exploitation of polarized light), ocean carbon cycle science, IOCCG training strategy  and plans for the 2019 International Ocean Colour Science meeting in Busan, South Korea (see below). The full minutes of the meeting are available here. 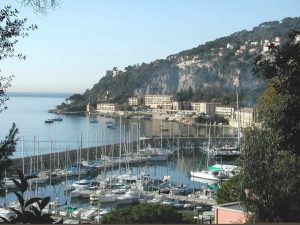 The fourth IOCCG Summer Lecture Series, dedicated to high-level training in the fundamentals of ocean optics, bio-optics and ocean colour remote sensing, will take place at the Laboratoire d’Océanographie de Villefranche (LOV), France from 25 June – 6 July 2018. Once again we were overwhelmed by ~130 applications, so the selections Committee had a very difficult task in selecting just 22 students to attend the course, given the number of applications that far exceeded the number of spaces available, and the general excellence of all the applications.

The IOCCG would like to thank all the candidates for their interest in the course. Congratulations to the 22 selected students who hail from 15 different countries around the world. Online video recordings of all the lectures will once again be provided, along with the PowerPoint presentations, providing a useful resource for all those students who are unable to attend the training course, as well as other interested researchers from around the world.

Following the past three successful International Ocean Colour Science (IOCS) meetings held in Darmstadt, Germany (2013), San Francisco, USA (2015) and Lisbon, Portugal (2017), the IOCCG will convene the 2019 IOCS meeting in Busan, South Korea (9-12 April 2019 *new dates*) in partnership with, and thanks to sponsorship from, the Korea Institute of Ocean Science and Technology (KIOST). Other sponsors will be announced in due course. The primary focus of the IOCS meetings is to provide a critical interactive forum for ocean colour scientists to communicate their views, ideas and concerns with the satellite agencies, and for agency representatives to inform the community of their ocean-colour products and services, and plans for new missions.  By collectively addressing common issues and goals, these community discussions will ultimately lead to better science. The overarching theme of the 2019-IOCS meeting is Fostering International Collaboration in Multi-Scale Ocean Colour Science and Applications.

The IOCS-2019 programme will include a special session focussed on remote sensing in Asian waters, keynote talks, panel discussions, four poster sessions for participants to discuss their own research, plus nine breakout workshops addressing key science questions.  Agencies will also be encouraged to demonstrate how they have responded to community input. The NASA Ocean Color Research Team meeting (OCRT) will likely be held in conjunction with IOCS-2019, along with training courses and other side meetings. The IOCS-2019 meeting website will be updated as planning progresses so please check back periodically.  Registration for IOCS-2019 will open in December 2018.

The IOCCG Ocean Colour Bibliography has been updated to include a new search function (keyword or author) as well as browse-by-letter.  This can help you to find all papers (submitted to the IOCCG Bibliography) on a particular topic or written by a specific author – check it out here. 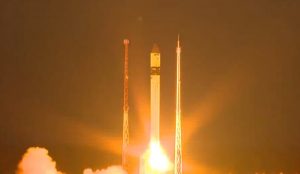 The Copernicus Sentinel-3B satellite was successfully launched into space on 25 April 2018  from Plesetsk, Russia.  Sentinel-3B joins Sentinel-3A in orbit, thus increasing coverage and data delivery for the European Union’s Copernicus Earth Observation programme. Sentinel-3B  carries the medium-resolution Ocean and Land Color Instrument (OLCI) which will provide multi-spectral data with a ground resolution of up to 300 meters per pixel and a swath width of 1,270 km, primarily dedicated to monitoring the world’s oceans as well as land cover.

ESA will lead the commissioning of Sentinel-3B with the support of EUMETSAT, who will then take over the control of the satellite for the routine operations phase and deliver marine data streams from both Sentinel-3A and Sentinel-3B. The mission is expected to begin routine operations in early 2019. See the full report from ESA.

You can choose among various sensors and data products, layer ocean colour data products, true colour imagery, gridlines, granule outlines and other conveniences.  Here are links to a couple of examples.  Enjoy!  Your feedback is welcome and feel free to redistribute this announcement. 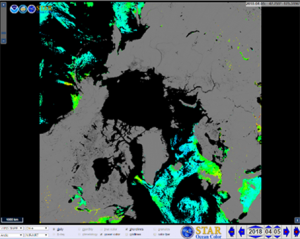 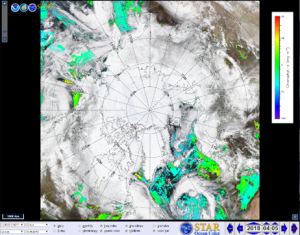 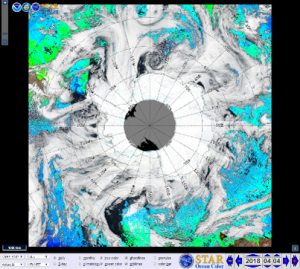 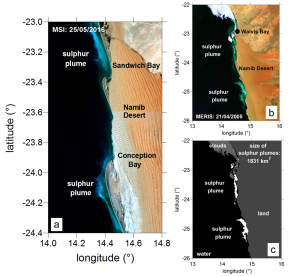 (a) The spatial high resolution MSI scene (10 m) characterizes the fine structures of sulphur plumes. (b) Sulphur plumes as MERIS RGB image in quasi-true colours on 21 April 2005. (c) Identified sulphur pixels including the size of the sulphur patches on this day (click to enlarge).

Several new publications have been added to the list of recent references in the IOCCG Bibliography including a paper by Thomas Ohde and  Isabelle Dadou (2018) entitled “Seasonal and annual variability of coastal sulphur plumes in the northern Benguela upwelling system”. They identified the sulphur plumes in the 2002-2012 time period using the water-leaving reflectance measurements of MERIS. Their specific algorithm is based on the differences in the spectral properties of Namibian Benguela optical water types.

The sulphur plumes have a strong seasonal cycle with pronounced main and off-seasons forced by local and remote-driven processes. The main peak season is in late austral summer and early austral autumn at the beginning of the annual upwelling cycle caused by increasing equatorwards alongshore winds. The sulphur plume activity is high between February and April during the seasonal oxygen minimum associated with the seasonal reduction of cross-shore ventilation of the bottom waters, the seasonal southernmost position of the Angola Benguela Frontal Zone, the seasonal maximum of water mass fractions of South Atlantic and Angola Gyre Central Waters as well as the seasonal arrival of the downwelling coastal trapped waves.

The off-season is in austral spring and early austral summer during increased upwelling intensity and enhanced oxygen supply. The annual variability of sulphur events is characterized by very high activities in years 2004, 2005-2010 interrupted by periods of lower activity in years 2002-2003, 2006-2009 and 2011-2012. The probability for the occurrence of sulphur plumes is enhanced in years with a lower annual mean of upwelling intensity, decreased oxygen supply associated with decreased lateral ventilation of bottom waters, more southern position of the Angola Benguela Frontal Zone, increased mass fraction of South Atlantic Central Water and stronger downwelling coastal trapped waves.

Several new positions have been added to Employment Opportunities on the IOCCG website including several PhD or postdoctoral fellowships (UK/Switzerland, Australia, USA and France), a research scientist at the University of Vigo, Spain and an Environmental Scientist in water quality remote sensing in Switzerland.  See the IOCCG website for further details.