The status of the five current IOCCG working groups was reviewed, all of which are making good progress, with the HAB working group hoping to complete their final report by the end of this year. Other items discussed included the Ocean Colour Radiometry-Virtual Constellation (OCR-VC) activities and actions, the task force on satellite sensor calibration, revision and coordination of in situ protocols, and plans for the 2017 International Ocean Colour Science (IOCS) meeting in Portugal (15- 19 May 2017). The full minutes of the meeting are available here.

The Third IOCCG Summer Lecture Series, dedicated to high-level training in the fundamentals of ocean optics, bio-optics and ocean colour remote sensing, will take place at the Laboratoire d’Océanographie de Villefranche (LOV) from 18 – 30 July 2016. Once again we were overwhelmed by over 140 applications, so the selections Committee had a very difficult task in selecting just 22 students to attend the course, given the number of applications that far exceeded the number of spaces available, and the general excellence of all the applications.

The IOCCG would like to thank all the candidates for their interest in the course and their outstanding applications. Congratulations to the 22 selected students who hail from 18 different countries around the world. The IOCCG will once again provide online video recordings of all the lectures, together with the PowerPoint presentations, providing a useful resource for all those students who are unable to attend the training course, as well as other interested researchers from around the world.

Despite only being in orbit for two months, Sentinel-3A has already delivered some impressive images, including the image below of the Strait of Gibraltar acquired by the spacecraft’s Ocean and Land Colour Instrument, OLCI. Sediments and algae in the seawater are clearly visible along the southwest coast of Spain.

Several other observation instruments are also onboard S-3A including the Sea and Land Surface Temperature Radiometer, SLSTR, which was recently turned on. This instrument will be able to provide high-accuracy surface temperature products to detect fine thermal structure over both land and sea. Sentinel data can be accessed online at scihub.copernicus.eu. The Sentinel-3 Toolbox can be used for visualisation and processing of Sentinel-3 OLCI and SLSTR data, as well as other optical data. Reference sets of core products will be released to the S-3 validation team during the commissioning phase and sample core products will be released to all users as early as possible.

ESA has signed technical arrangements with NASA, NOAA and USGS to make data available to them from the European Sentinel satellites. NASA’s Ocean Biology Processing Group (OBPG) will acquire the full OLCI mission data at Level-1B through the ESA-NASA gateway. NASA is planning to distribute both Level-1B (mirror) and likely NASA Level-2 data via the ocean color web portal (but awaiting mandate from EOSDIS/ESDIS). SeaDAS implementation is underway for OLCI data, with a processing capability from Level-1B with NASA algorithms (SeaDAS is now built on BEAM architecture). Further, NOAA and EUMETSAT hope to finalize and sign their technical arrangement for acquisition and distribution of Sentinel-3 data in May. NOAA will distribute EUMETSAT Level-2 data initially and eventually NOAA MSL12 Level-2 data as well.

A new version of the Sentinel App is available which includes the Sentinel-3A mission. Tracking shows S-3A orbital positions in real-time, and notifications can be sent when the satellite is over the user’s location. The App also allows users to read the latest news about the mission, and learn more about the products. The Sentinel App can be downloaded directly from your iOS device by searching for “ESA Sentinel”.

Several new employment positions have been posted on the IOCCG website including Postdoctoral Fellowships at the Bedford Institute of Oceanography (Canada), University of Maryland (USA), and University of Oldenburg (Germany), Senior Scientist and Satellite Services Manager positions at the Plymouth Marine Laboratory (UK), a research assistant at University Laval (Canada), and a Tenure Track Group Leader at the Swiss Federal Institute of Aquatic Science and Technology. For further details on these, and other employment opportunities, see here.

A joint Korean-U.S. ocean colour (KORUS-OC) field campaign will take place in late May – early June 2016, in the East and Yellow Seas, with support from NASA and the Korea Institute of Science and Technology (KIOST). Scientists from several institutes and universities including NASA, KIOST, NOAA, NRL and Univ. New Hampshire are participating in this field campaign. KORUS-OC will coincide with the joint U.S.-Korean air quality campaign (KORUS-AQ) supported by NASA and the National Institute of Environmental Research (NIER) of Korea. Currently, South Korea has the only geostationary ocean colour instrument in orbit (GOCI, launched in 2010 onboard the COMS satellite). NASA has plans for the Geostationary Coastal and Air Pollution Events (GEO-CAPE) mission, which will measure tropospheric trace gases and aerosols, coastal ocean phytoplankton, water quality and biogeochemistry from a geostationary orbit, thus advancing the science of both coastal ocean biophysics and atmospheric-pollution chemistry. The R/V Onnuri (see below) will support the KORUS-OC team collecting in situ optical, biological and biogeochemical measurements for unique datasets that will also include airborne flights and geostationary ocean-colour satellite data.

KORUS-OC data will be evaluated to determine the strengths and limitations of the GOCI sensor on the retrieval of biogeochemical properties and to provide key information on satellite specific issues, e.g., impact of atmospheric corrections, view angle, and diurnal solar radiance variability on the quality of satellite retrievals, which can be applied to further refine the GEO-CAPE coastal ocean colour requirements. A key advance provided by geostationary ocean colour sensors, which will be evaluated through KORUS-OC, will be the capability to directly quantify diurnal and daily measurements of biological productivity from hourly GOCI observations.

Several new publications have been added to the IOCCG Recent References list including a paper by Mélin et al. (2016) entitled “Uncertainty estimates of remote sensing reflectance derived from comparison of ocean color satellite data sets”. Assigning uncertainty to ocean-colour satellite products is a requirement to allow informed use of these data. The authors derived uncertainty estimates using a co-location approach applied to coincident daily records of the remote-sensing reflectance, RRS, obtained from MERIS, MODIS and SeaWiFS. The approach is spatially resolved and produces σ, the part of the RRSuncertainty budget associated with random effects. The global average of σ decreases with wavelength from approximately 0.7-0.9 10-3 sr-1 at 412 nm to 0.05-0.1 10-3 sr-1 at the red band, with uncertainties on σ evaluated as 20-30% between 412 and 555 nm, and 30-40% at 670 nm. The comparison of σ with other uncertainty estimates derived from field data or with the support of algorithms provides a consistent picture. When translated in relative terms, and assuming a relatively low bias, the distribution of σ suggests that the objective of a 5% uncertainty is fulfilled between 412 and 490 nm for oligotrophic waters (chlorophyll-a concentration below 0.1 mg m-3). 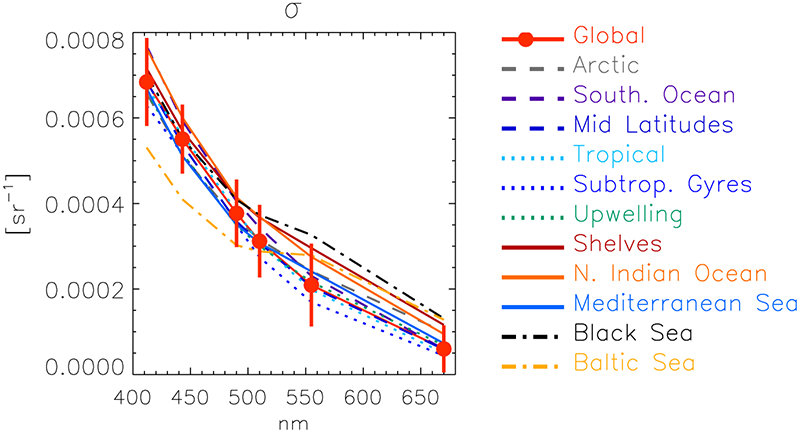 Average spectra for uncertainty estimates, σ, for the global ocean and selected ensembles (click to enlarge).

In another related new publication, Pahlevan et al. (2016) simulated MODIS and VIIRS ocean colour products to quantify the uncertainties associated with differences in spatial sampling for a) product intercomparison practices at regional scales, and b) in situ validation (matchup) exercises at coastal/ocean sites. The authors showed that differences in the along-scan footprint sizes of MODIS and VIIRS yield differences in products at regional scales. On the other hand, the assessment of the spatial representativeness of in situ matchups indicate that while temporal averaging minimizes the uncertainties, per-matchup spatial mismatch can well exceed 10% for RRS(443) products. 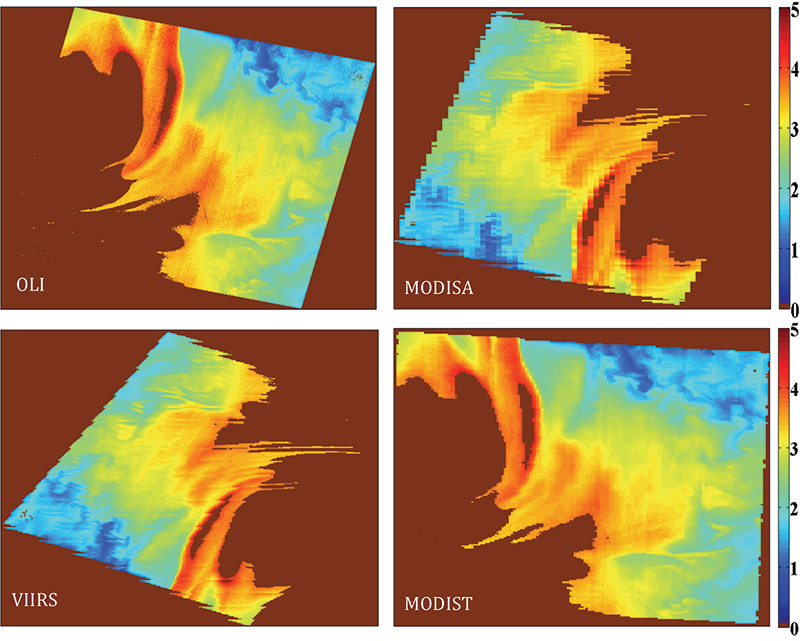 Several ocean colour related conferences and meetings will take place within the next few months including: 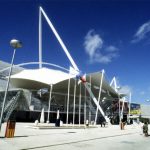