Click on the following links to see images from that continent. All images courtesy of the European Space Agency 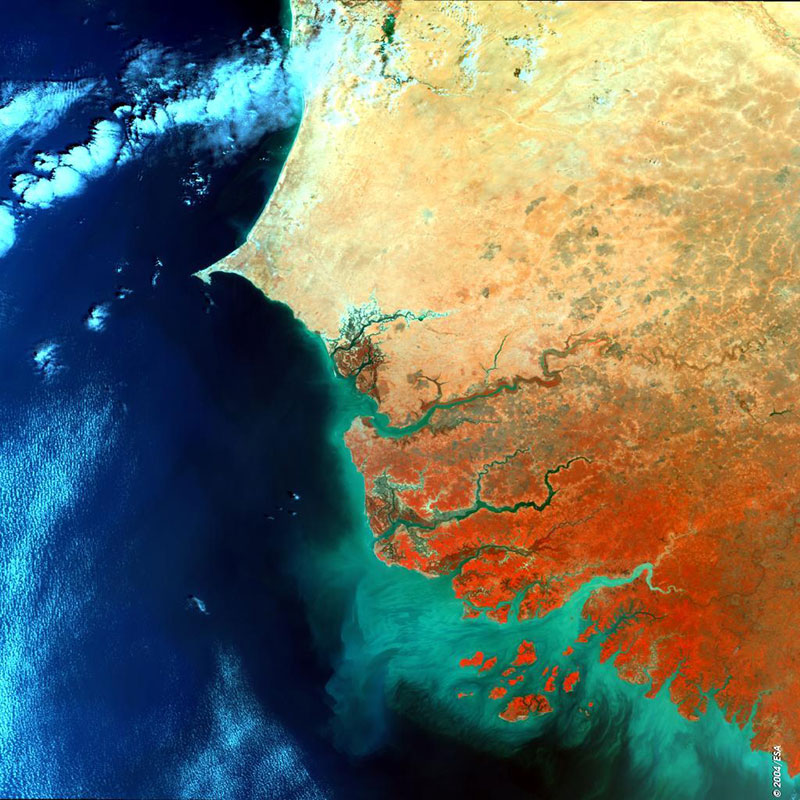 The most striking feature shown in this MERIS image is the contrast between the desert areas of Senegal, to the north, and the vegetated coastal plains of southern Senegal, Guinea-Bissau and Gambia, to the south.

The Bijagos Archipelago is located off the Guinea-Bissau coast. The green colour of the sea around the islands is the result of sediments which are transported and deposited by the River Ge’ba.

To the north of the image, in Senegal, the Cape Verde peninsula can be seen clearly. The peninsula has a peculiar “hook-like” shape and forms the westernmost part of Africa. It is about 32 km long and, at its maximum, 11 km wide. The capital Dakar lies on Cape Almadies, the western tip of the peninsula.

This MERIS false colour image displays the East African island of Madagascar, the Comoros Islands can also be seen to the North West just poking through the clouds.

The spectral bands have been chosen to highlight the different types of vegetation on the island. The bright yellow in the east and the north represents the extent of the tropical rain forest. The more red tones in the middle represent more highland areas, with the capital Antananarivo near the centre of the island can be found. To the west of the island the green tones represent deciduous forest. 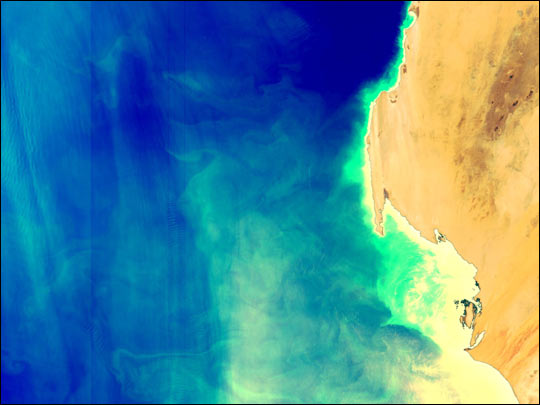 Just off the coast of West Africa, persistent northeasterly trade winds often churn up deep ocean water. When the nutrients in these deep waters reach the ocean’s surface, they often give rise to large blooms of phytoplankton. This image of the Mauritanian coast shows swirls of phytoplankton fed by the upwelling of nutrient-rich water. 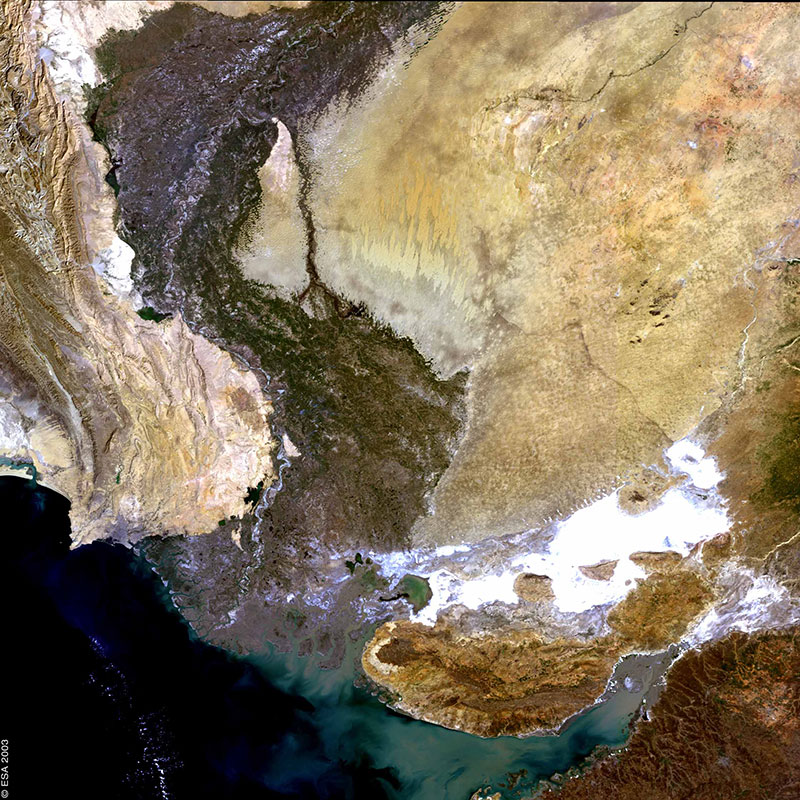 This MERIS image shows the course of the Indus River through Pakistan, spilling out sediment into the Arabian Sea. Along the coast to the west of the Indus Delta is the city of Karachi, observed in the false colour image subset. The MERIS bands were especially chosen in this image to illustrate the contrast between land and water so the individual braided channels and complexity of the delta can be observed. 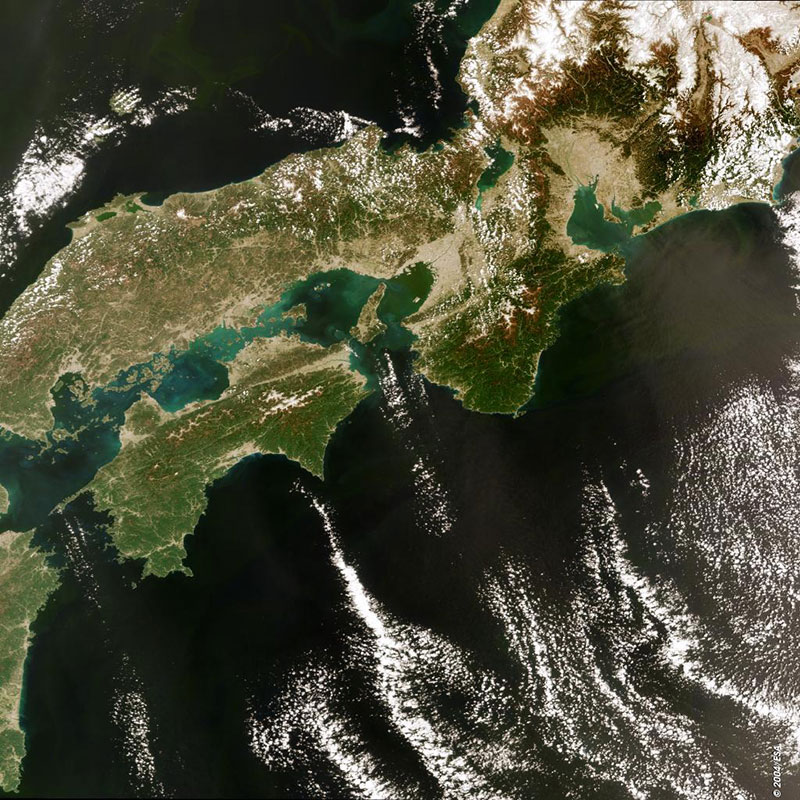 This MERIS was acquired over Honshû, the largest Japanese island (top), Shikoku (centre) and part of Kyushu (lower).

Shikoku is the smallest of the four main islands of Japan and is heavily forested and mountainous; the highest peak is Mount Ishizuchi (1,982 metres/6,503 feet) located in the northwest area of the island. Between Honshu, Shikoku, and Kyushu is the Inland Sea, dotted with islands and connected with the Pacific Ocean (south of the islands) and the Sea of Japan or also known as the East Sea (north) by three narrow straits. 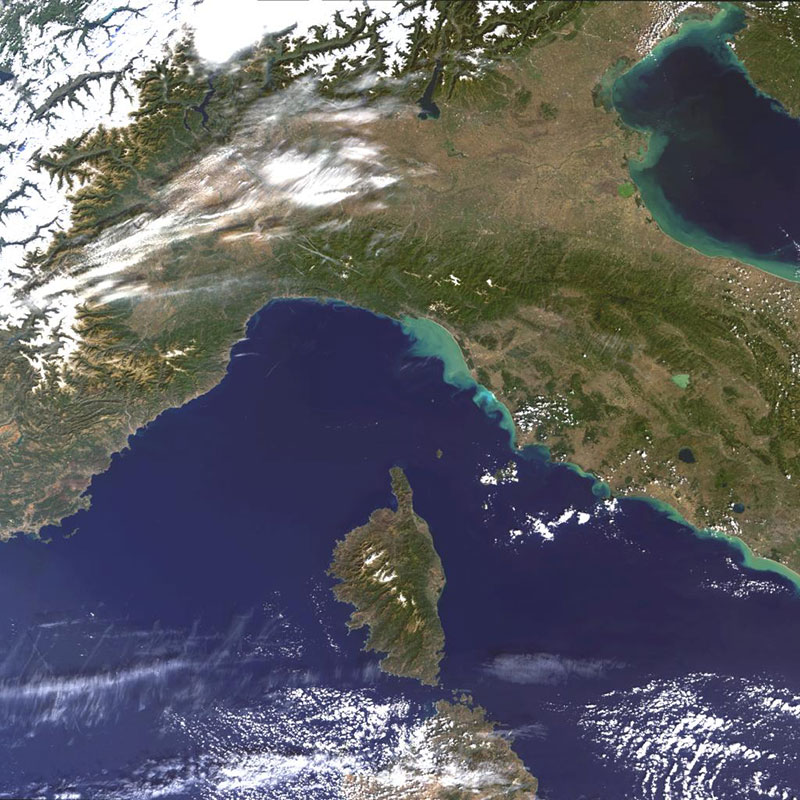 This MERIS image centres over Northern-Central Italy and Corsica.

Corsica is the fourth largest island in the Mediterranean Sea after Sicily, Sardinia, and Cyprus and is part of the French Republic. The island has an area of 8,682 square kilometres and a largely mountainous landscape.

The snow-covered Swiss Alps and Northern Central part of Italy can be clearly seen in the top corner of the image. Further east is the Venetian Lagoon and the city of Venice. The saltwater lagoon stretches along the shoreline between the mouths of the Po (south) and the Piave (north) Rivers. The Venetian Lagoon has a surface area of around 550km². It is around 8 per cent land, including Venice itself and many smaller islands, and about 11 per cent water, or canal as the dredged channels are called. About 80 per cent is mud flats and salt marshes. The light green colour of the sea in the lagoon and along the Adriatic coast is likely to be the result of the high amount of sediments deposited 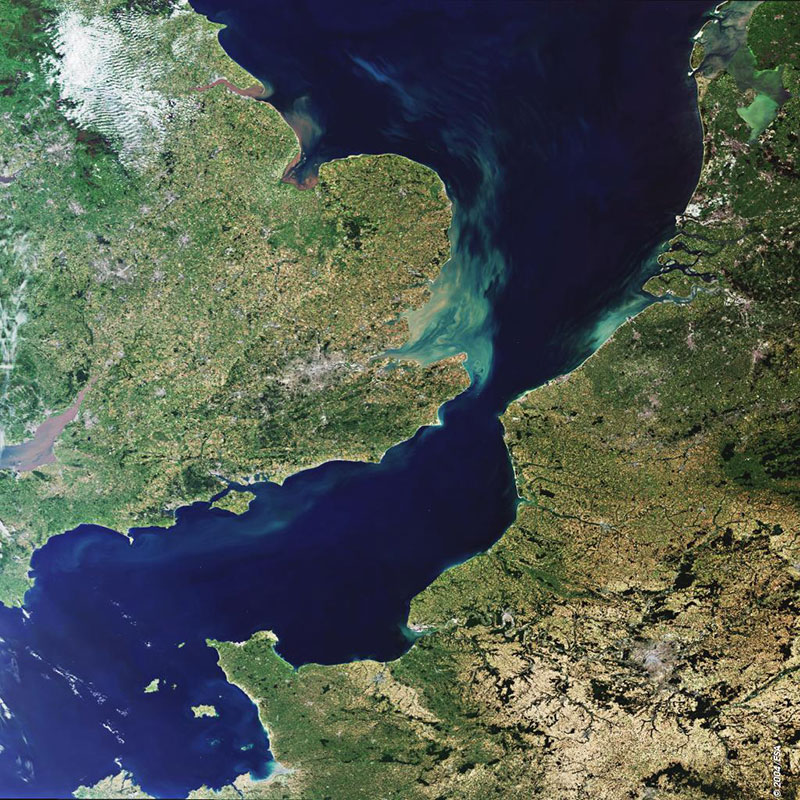 Here we see the English Channel. The Strait of Dover is the narrowest point, only 34 km (21 miles), from Dover to Cape Gris-Nez. In the upper part of the image most of the southern part of England can be observed, from Plymouth to Margate on the coast-line and from Bristol to London (large bright area). The light green-bluish colours in the sea (Goodwin Sands area) indicate shallow waters and increased sedimentation in the area. On the opposite side of the channel are the French regions of Brittany and Lower Normandy. To the left of Lower Normandy are the British islands of Jersey and Guernsey. Bands 7, 5 and 2, corresponding to visible light, were used to create this image 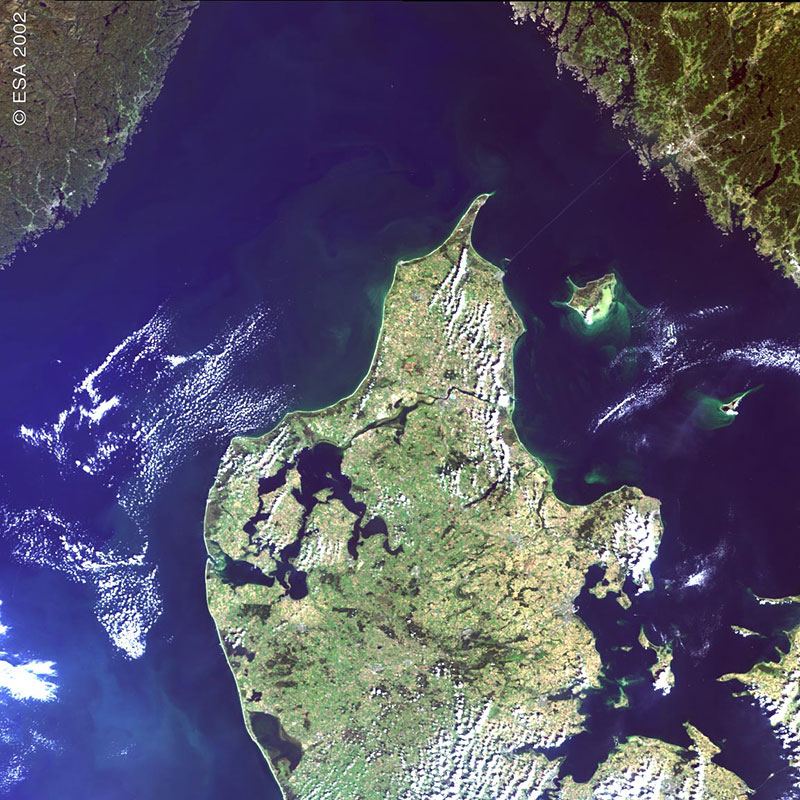 Northern Denmark is shown here. Clearly seen in the eastern part of the country is the expanse of water, Limfjorden, with the town of Alborg to the north east of the fjord. Further south along the east coast is the city of Arhus. Looking at the image in more detail, in the southeast corner, the new bridge over the Store Baelt between the islands of Fyn and Sjaelland, linking Copenhagen to the mainland can be seen. The islands of Laeso and Anholt off the east coast in the Kattegat are also visible. The bright green colour off the south east of Laeso and the west of Anholt is likely to be suspended sediment; a lot of sedimentation takes place in this particular channel. 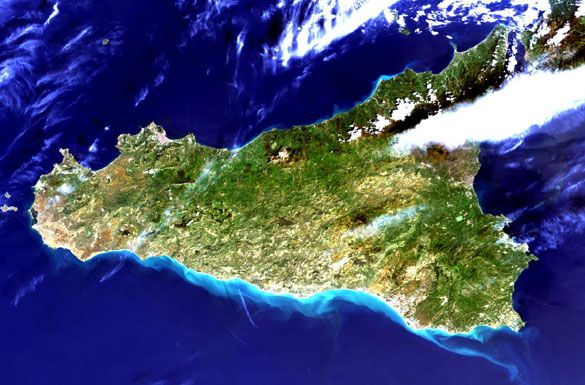 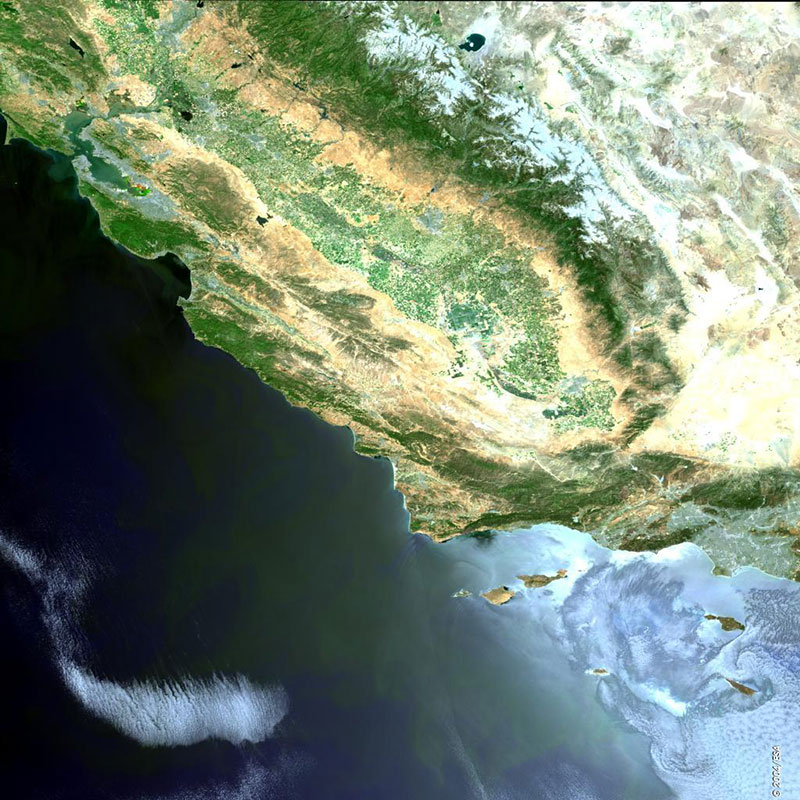 Here is the coast of California; two cities appear as large grey areas in the image. The San Francisco metropolitan area is seen winding its way around the San Francisco Bay in the north, and Los Angeles lies to the south.

Between the two cities we can see the mountains of the Coastal Ranges, separated from the ranges of the Sierra Nevada by the central valley. The valley is one of the most important agricultural areas in the USA, and on the image we can see in places a chequered pattern of farmed fields. 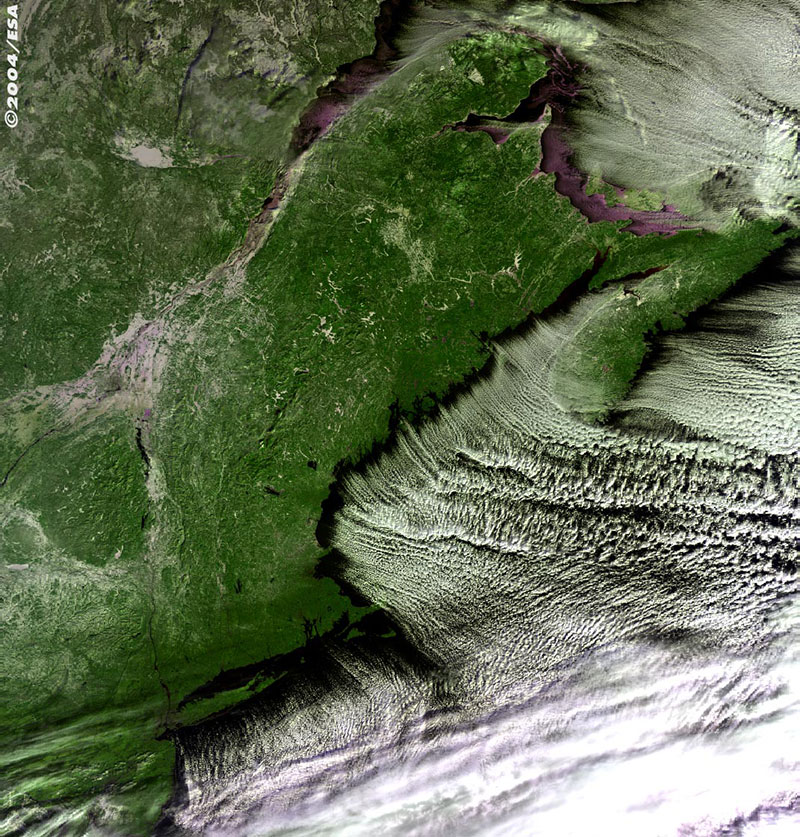 This MERIS false colour image shows a weather front encroaching on the eastern North American seaboard. The clouds follow the shoreline; the cities of Boston and New York can be seen. Further north is Nova Scotia and on the east coast we can see Halifax. New Brunswick appears across the Bay of Fundy, which is famed for having the highest and most powerful tides in the world.
At the top of the image lies the Gulf of St. Lawrence with the St. Lawrence River flowing into it. Along the river’s banks, the cities of Quebec and Montreal are visible. 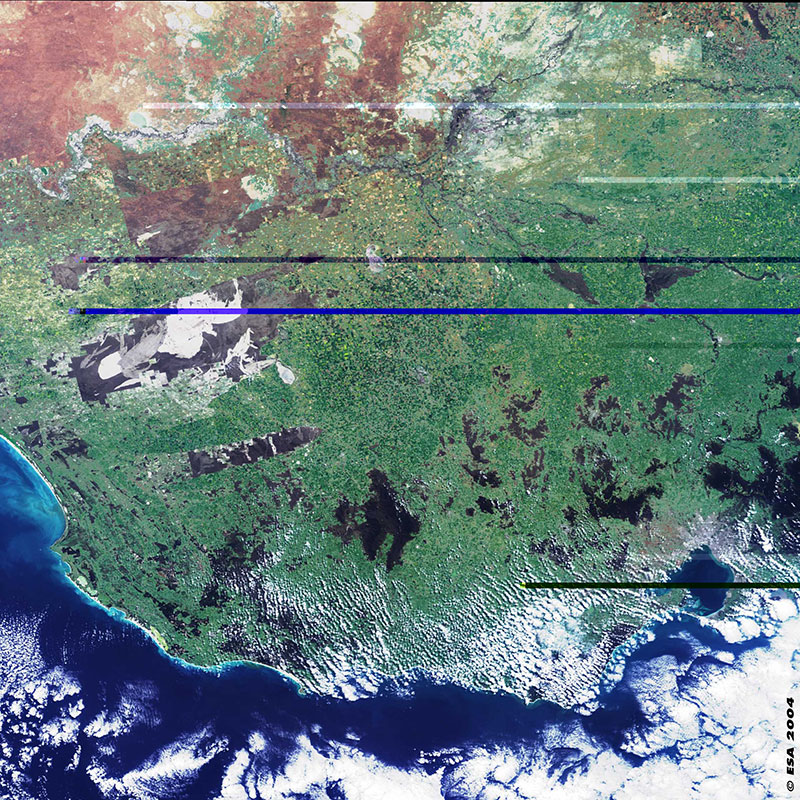 This MERIS image shows part of the state of Victoria in south Australia. The capital city, Melbourne, is seen in grey colour and partially covered with clouds in the bottom right part of the image. The marked contrast between the country’s arid interior with salt lakes seen in bright white colour and the coastal regions more vegetated can be seen in the top left part of the image. The Murray River is in the top part of the image flowing towards the west where it empties into the Indian Ocean (its mouth is to the west of this image). The large dark areas (in grey colour) seen in the left part of the image surrounded by green vegetation are land-protected areas by national and state parks where the semi-arid natural vegetation is preserved. They are the Big Desert (top) and Little Desert (bottom) Parks. 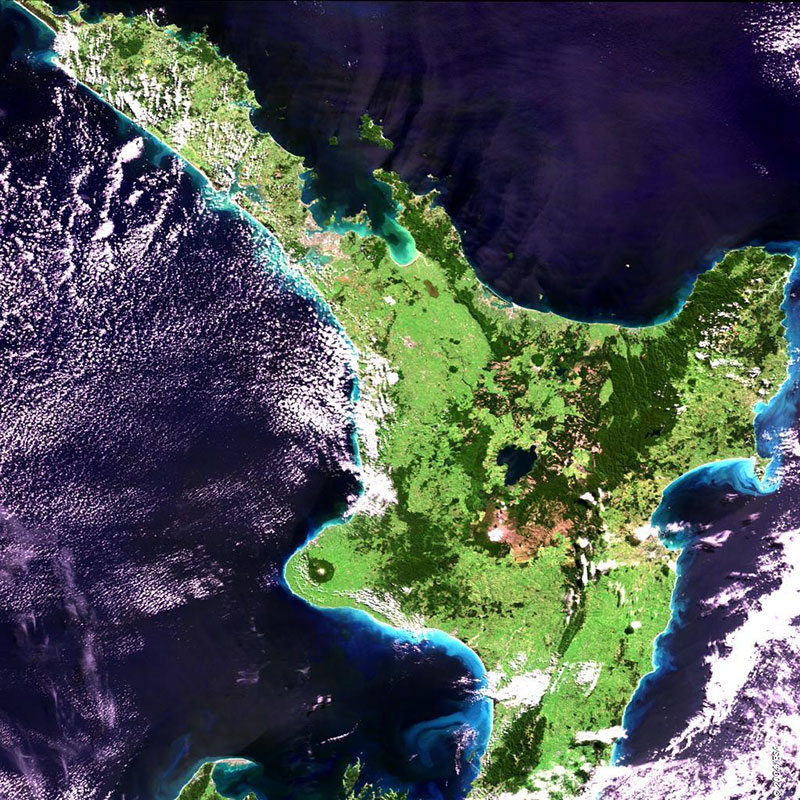 New Zealand’s North Island appears here. To the northwest the cities of Auckland and Manukau can be seen in the browner shades.

Much of the island is grasslands, shown in lighter green. The dark green is more forested areas, particular in the national parks of Urewera, to the east of the island and Tongariro in the centre.

The circular feature in the southwestern part of the island is the forested flanks of the dormant volcano Mt. Taranaki situated in Egmont National Park.

Around the island the lighter blue in the sea shows how the currents are transporting sediment. The greener area within the Bay of Plenty is also likely to be a response to the much shallower water in this area. 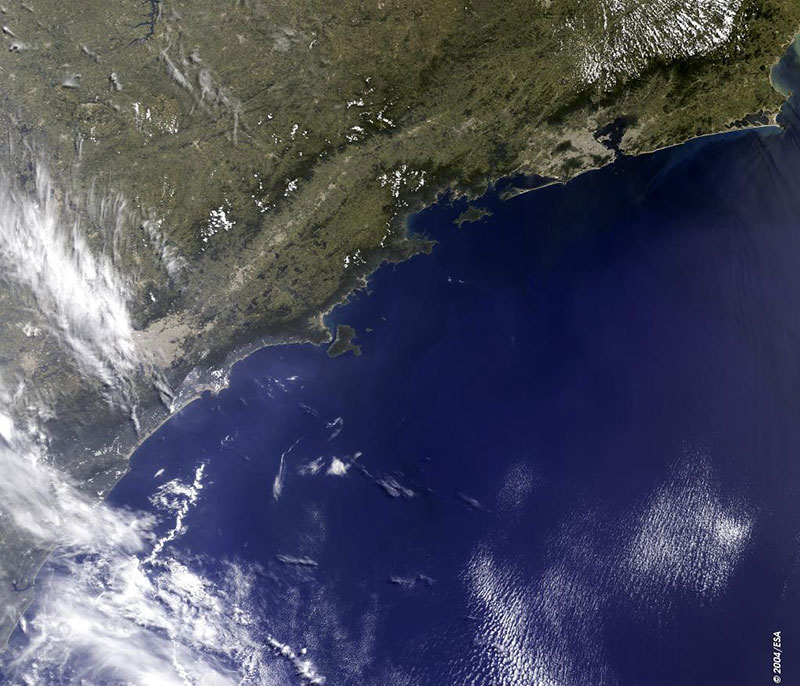 Here is the city of Sao Paulo (large bright brown area centre left on the image), in southeast Brazil. The city lies between the hills of the Serra Guasta on the Piratininga plain. The Tiete River flows between Sao Paulo and the more southern city of Port di Santos, located on the Atlantic coast. Sao Paulo extends along a large part of the coastal region of the southeastern Brazil. In the upper right portion of the image (light brown area) near the entrance to Guanabara Bay is the city of Rio de Janeiro. 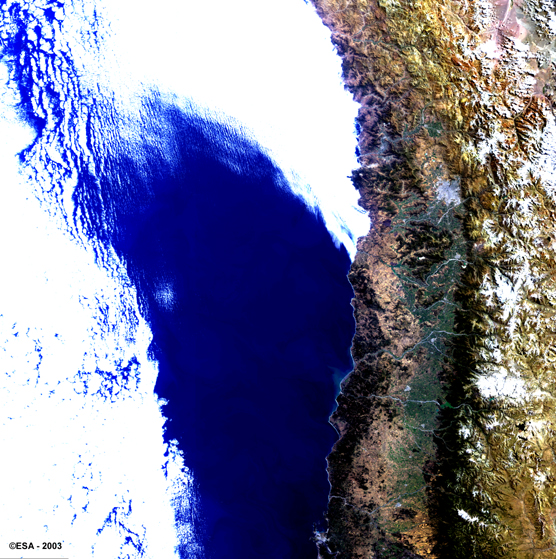 Most of the country of Chile can be observed on this MERIS image, particularly the area surrounding the capital, Santiago. 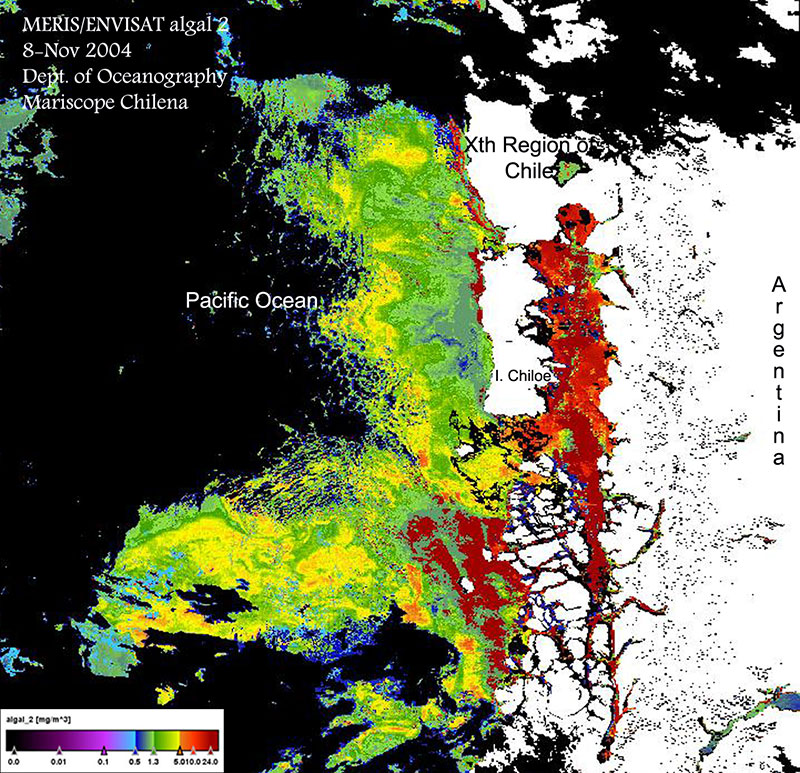 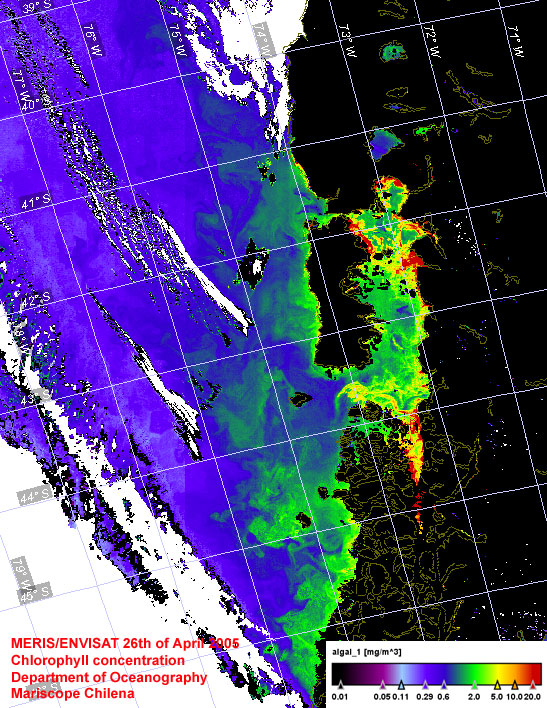